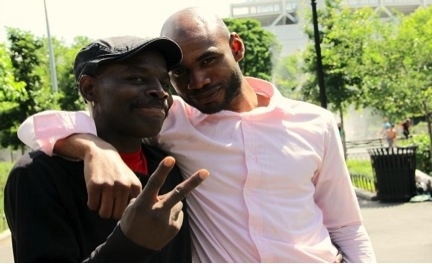 Father’s day was extra special this year for Terrell Starr.  Terrell grew up under his grandmother’s wing not knowing his father.  Chris Truesdale, Terrell’s father, spent 29 years not knowing that he had a son!

This all changed in 2009 when Terrell started searching Facebook for “Chris Truesdale” in order to find his father.  “I thought that I was going to live the remaining years of my life without knowing who my father was.”, Terrell stated.

Luckily for both of them, Chris purchased a computer just two weeks earlier!  When he saw the message from Terrell, he immediately knew.  “When I saw the picture…oh yeah,’’ Truesdale said. “We don’t have to go to Maury (Povich).”

Terrell’s mother found out that she was pregnant after Chris left his military base and unfortunately she was never able to find him.

“I’m not a guy that has children and don’t take care of them,’’ Truesdale said. “Shoot, I mean, had I known he was my child, he’d have been right there.”

The two have been reunited and have gotten real close.  So close that Terrell moved in with his father at 31 years old when he couldn’t find a job!