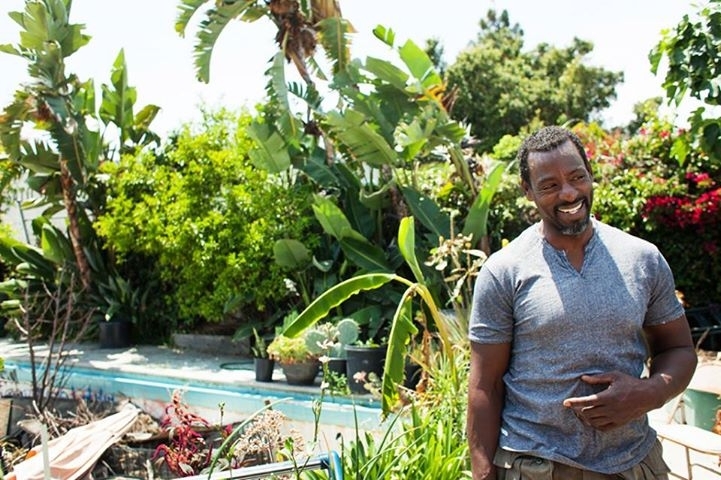 “Food is the Problem, and food is the solution” says Ron Finley, a local man that lives in South Central Los Angeles.  He says in his city, more people are dying from the “drive thru’s” then the “drive bye’s”.  Ron wanted to solve a problem that he saw in his area.
He used to have to drive 45 minutes round trip just to get an apple that didn’t have pesticides in it.  In the parkway in front of his house, he built a garden in it.  Its the city’s property, but they said he has to take care of it.  So why not plant a garden there!?
Ron Finley and his group the “L.A. Green Grounds” who are a “pay it forward” group comprised of local farmers/planters created the garden for him.  His group goes around planting gardens in vacant lots and different places around South Central LA.
People ask him all the time “Aren’t you afraid that people will steal your plants”?  “Hell no I’m not afraid!…That’s why its on the street!…that’s the whole idea…I want them to take it, and at the same time I want them to take back their health”.
Ron Finley’s plans aren’t only to build blocks of gardens around town, but he wants to turn shipping containers into healthy cafe’s around the area.  He has trained local kids to learn the trait of gardening.  Wants them to turn to something like this to get their minds off the street life and to learn a life skill that could take them somewhere.  He wants kids to feel the joy, pride, and honor in growing your own food.
According to Ron, if you want to meet with him to discuss things, then there’s only one place to meet him….bring your shovel to his garden 🙂  Personally I love his ideas, and love his vision.  Do yourself a favor and watch this video.
Have a great day, and let the good news be yours,
Jeremy
Spread the love
2013-06-21
Previous Post: Oprah donates to brothers’ Boston charity
Next Post: London parks to get a high-tech treehouse upgrade