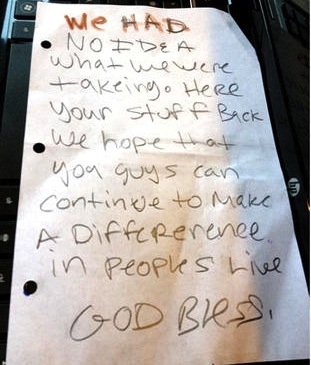 On July 31st, burglars broke into the San Bernardio County Sexual Assault Services non-profit office.  They stole several desktop computers, monitors, and a laptop.  This can be devastating for any company to recover from, especially a non-profit.

“All my stuff was in front of the door.  There was a shopping cart, and there were the PCs that were taken, there was the laptop – everything was there.”, said Candy Stallings, the nonprofit’s executive director.

When the police opened the laptop, they found a note inside which read, “We had no idea what we were takeing. Here your stuff back we hope that you guys can continue to make a difference in peoples live. God bless,” said the note with many misspellings.

“This is the first time in my career I have seen the return of stolen items,” said San Bernardino Police Lt. Paul Williams.

Stallings made a copy of the note and plans to frame it!