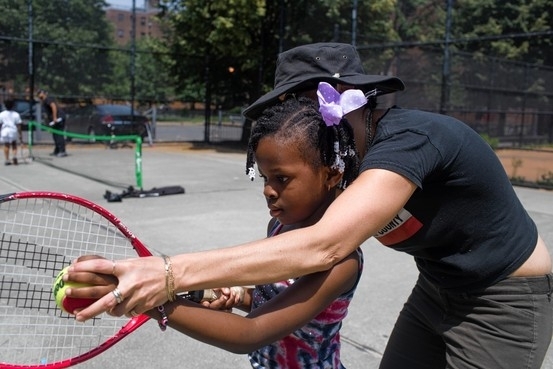 On most summer Saturdays, Nia Cardoze practices her forehand at the tennis courts outside Brooklyn’s Marcy Houses, alongside other kids from the sprawling public housing complex. “I want to become the No. 1 player in the world,” said Cardoze, who is 10 years old. Cardoze is a member of the Kings County Tennis League, a nonprofit that provides coaching and tennis equipment to children living in four public housing projects in Brooklyn’s Bedford-Stuyvesant neighborhood. Every Saturday, about 100 kids gather in small tennis courts or playgrounds alongside volunteer instructors.Michael McCasland, a tennis standout in high school, moved to Bed-Stuy from Washington, D.C., in 2008 and noticed the gritty Marcy tennis courts, which were rarely used for tennis, he said. One Saturday, McCasland arrived at the courts with a bucket of tennis balls and an extra racket, and began offering free tennis lessons to the neighbors.“Nobody showed interest,” McCasland said. “It was weird to have these tennis courts and the people didn’t want to play tennis.”McCasland was undeterred. He posted fliers at bodegas and walked the neighborhood offering to teach kids for free. He said he wanted to show his neighbors that tennis wasn’t just a “white guy” game. After a month he had five students. By the summer’s end he had 20.McCasland developed a retention program for the next summer. Children who came to three practices could rent a racket for the week, free of charge. Five practices earned the kid a uniform. He also began mentoring his students, helping them learn vocabulary and develop life skills outside of tennis.For three summers, McCasland ran his program on a shoestring, collecting used rackets from friends and holding informal fundraisers at bars. In 2011 he received an email from an official with the USTA’s Eastern Section, which oversees tennis development in greater New York City.  The relationship with USTA led to the grant money, which has allowed McCasland to purchase rackets, print uniforms and expand into the other public housing complexes.As McCasland puts it: “This project really has an impact. It builds a connection between tennis and the kids, the kids and their parents and parents to parents.  We get kids more active, and we also see behavioral changes.”