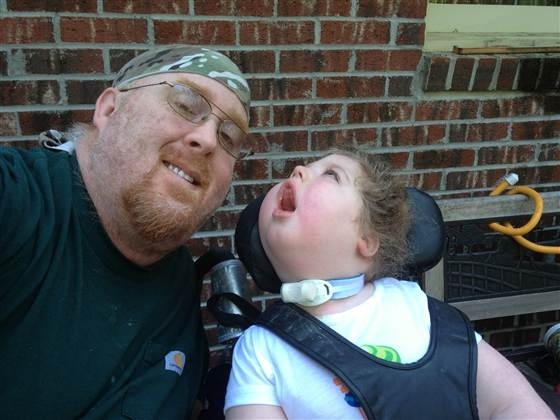 It’s a long journey from a fun-loving pro-wrestler to a stay-at-home dad caring for a child who can’t talk or walk and depends on him around the clock.  Watching over his softly silent 7-year-old daughter, Steven Sharp calls her birth in 2006 both the greatest and the worst day of his life.

Brain damaged since arriving into the world, Samantha Grace Sharp was given two years to live, but that grim life sentence has come and gone — and she is hanging on.  With his wife’s job providing health insurance, Steven has taken on the role of stay-at-home dad and nurse. He changes his daughter’s diapers, administers her medicine, feeds her and gives her stretches.

Samantha can’t walk or talk – though she has some movement in her arms and legs – and is dependent on her parents’ care 24 hours a day. She’s basically an infant in the body of a 7 year-old, her mom noted.  Carlene, Steven’s wife, calls her husband’s care amazing.  “It is truly a blessing that I have him because I don’t know many men… who would have hung around,” she said, adding she sees a strong bond between father and daughter. “Sam will always be daddy’s girl. Always and forever.”