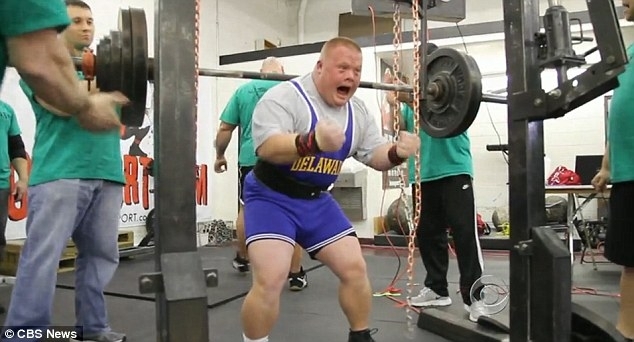 One Down’s Syndrome man has overcome the odds to become a champion weightlifter. Not just in special Olympics competitions – Jon Stoklosa regularly beats the best of his non-disabled opponents!When he was 12-years-old Jon started lifting weights in the basement with his brothers. A year later he was benching 185 pounds. By age 16, he had improved to 225 pounds.  He won a gold medal at the Special Olympics World Games in 1999, but now he competes in power lifting competitions going up against athletes who aren’t disabled.  With his sturdy 5-foot-5 frame, he can bench-press more than 400 pounds, and can squat 440 pounds and dead-lift an identical amount.Not only are his competitors impressed, but he’s also a crowd favorite, often inciting wild applause.  He has picked up a “Most Inspirational” award, a unanimous choice by other competitors, many of whom gathered to watch the 31-year-old make his lifts.  He’s been known to sport a colorful mohawk on the day of a competition. He loves to pound his chest after a successful lift.  He yells.  He flexes his muscles.  Except for when he’s lifting – and his face wears a look of concentration – he’s nothing but smiles.When asked why he continues to push himself in his sport, Jon replied simply: “It’s fun.”  Sitting at the kitchen table in his family’s Newark home, Jon comes across as a laid-back, almost shy guy. He answers questions with a word, preferring instead to look out the backyard window and let his parents, Hank and Liz, do the talking.When he’s not working out, Jon stays active at his job bagging groceries at the local Acme grocery store.  Friends and family say Jon Stoklosa, who was born with Down syndrome, is an example of what is possible when people aren’t tethered by labels.