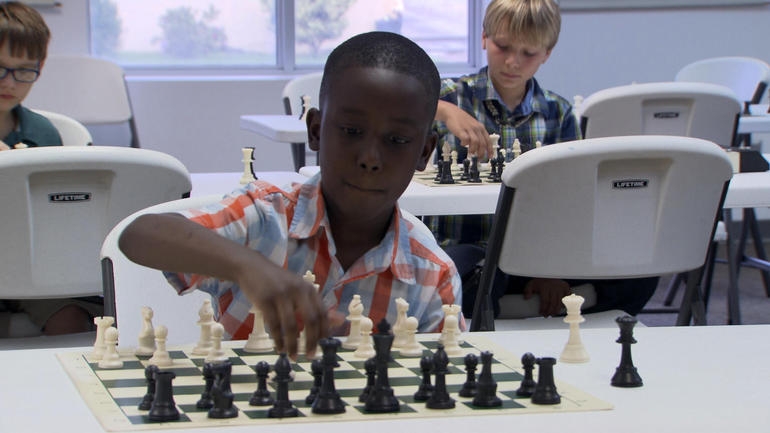 Franklin County in a remote corner of Mississippi has two stoplights, one elementary school, and long ago lost its only train stop.  Could kids learn chess here?  Would they even want to?  Dr. Jeff Bulington took on the challenge, accepted a contract from an anonymous benefactor, left his home city of Memphis, and moved to Franklin.  Predictions were that Bulington could perhaps find a dozen interested kids.  He found hundreds!

Bobby Poole, Bulington’s assistant chess coach, put it: “All the statistics, everything you look at, Mississippi is the poorest.  It’s the dumbest.  It’s the fattest.  We know that the rest of the nation has that conception of us….  People said that country kids couldn’t learn chess.  We showed ‘em different….  We teach history.  We teach geography.  We teach science.  We teach math.  We teach it all using the chess board….”

Last spring Bulington’s team of mostly elementary school kids from Franklin County faced off against much older high school players at the Mississippi state championships, and they held their own!  Braden, one of the Franklin kids, put it: “They were basically, like, trying to say we were a joke cause we were kids.  But after the game, we usually beat ‘em and they were like very shocked.”

Then, a year-and-a-half after Jeff Bulington first showed up to introduce chess to a small county in Mississippi, 33 of Franklin County’s chess wonders and their parents traveled to the national school championships.  They faced more than 1,500 players from 644 schools, many from wealthy suburban school districts.  The surprising result: Franklin’s fifth graders came in 8th among all the fifth grades and their sixth graders came in 10th among all the sixth grades.  As one Franklin parent put it: “What happened is a bunch of hillbillies beat the snot out of a bunch of really highly educated, sophisticated people.  So that’s what happened…”

Chess has helped the Franklin kids see there’s more to themselves than they’ve seen before:

Rebekah: “I feel like chess could take us anywhere.  But it’s not about where it takes us, it’s about how far it takes us.”

The year before chess arrived, seven of the 93 graduates from Franklin County High School went on to a four-year college, but every chess player at Franklin says he or she plans to attend college some day.

It’s often said that to teach is to touch a life forever.   Through chess, these Franklin children’s lives have been forever changed with hope and a brighter future.  The cost of such a chess program is minuscule compared to almost all other educational programs.  Hopefully other school districts, especially less advantaged districts, can take notice.