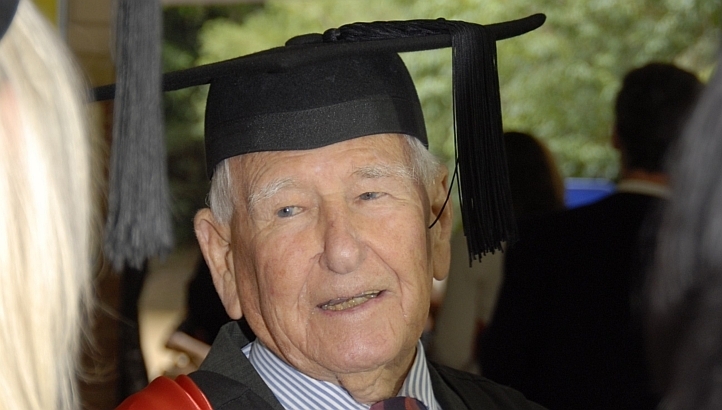 Guinness World Records also recognized the world record for the oldest existing, and continually operating educational institution in the world, set by the University of Karueein, founded in 859 AD in Fez, Morocco.

This is his fourth degree after completing dentistry in 1936. He went back to school in his 80s to keep himself mentally active.

Dr Allan Stewart, born on March 7, 1915, is already the holder of the Guinness World Records title for being the oldest graduate after completing a law degree in 2006 at the age of 91.

Mr Stewart says much has changed over the years, not least of all, the technology.

“I realised I had to be reasonably literate with the computer,” he said.

“I was more or less self-taught but with experience I was able to handle that and I found that was the only way to do a university degree at my age.”

The graduate has also noticed a distinct difference in the apparel of the students.

“We had to wear very conservative clothing in those days,” he said. “Up here university students are mostly in holiday gear, or at least smart-casual.”

Mr Stewart lives independently and also acts as a carer for a friend. He says he thinks about each day and what he wants to achieve and says that gives him focus and purpose.

When Mr Stewart is not studying he is assisting in the local community technology centre, walking, gardening, fishing and, up until last year, was playing golf.

Mr Stewart, who was born in 1915, has six children, 12 grandchildren and six great-grandchilden. He worked as a dentist and earned his second degree in dental surgery.

‘I think I can hang up my mortar board and academic robes after this one – although I said that after my last degree and then I got bored,’ said Dr Stewart, from Port Stephens, north of Sydney, ahead of his graduation ceremony.

“There’s a lot of surprise but I think the fact that I’ve done what I’ve done has been an encouragement to a lot of people, particularly older people and say baby boomers to do the same,” he said.

Mr Stewart said people were never too old to study.

“It is never too late to expand your mind, make new friends and challenge yourself to achieve something worthwhile.”