By: The Good World News Team
In: Environment 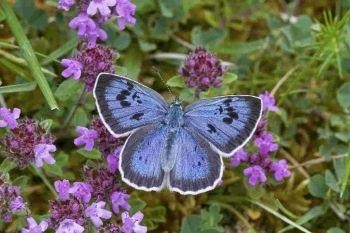 Farmers who are working to help threatened birds on their land are also more likely to have healthy populations of bugs, butterflies, bumblebees and bats, new scientific research has revealed.

In two studies carried out in the West Country (and funded by Natural England) RSPB conservation scientists surveyed a range of species at farms with environmental measures in place for two of the UK’s rarest farmland birds – cirl buntings and stone curlews. They compared the diversity and abundance of wildlife with similar farmland which was not involved in bird conservation schemes.

The environmental measures studied were designed specifically to meet the needs of threatened birds, and have proven to be successful in helping UK populations to recover. However, researchers found that they were also providing a much needed boost for all kinds of other species from wild plants to insects and small mammals.

In the south west, arable land on Salisbury Plain with fallow plots for nesting stone curlews was found to have almost twice as many wild plants species, five times as many butterflies and bumblebees and four times the number of hares as similar land without the plots.

And where pastureland had been managed for cirl buntings in Devon there were five times as many butterflies and other measures on the same land helped double the number of ground beetles.

Martin Harper, RSPB Conservation Director, said: “These three studies have thrown up some really interesting results. It is great to see that farmers who are working hard to help birds are also providing habitats for many other plants, bees and bugs.

“We know that these measures are vital if we are to restore lost populations of threatened birds – but now we have confirmation that they are providing real benefits for a range of other beautiful and fascinating species as well.

“A lot of attention is directed at farmland birds because some species are in real danger and it is farmers who hold the key to saving them. However we must look at the whole ecosystem if we are going to ensure the long term health of our countryside. The birds that are the focus of these agri-environment measures are acting as good indicator species – by helping them, we have helped a whole range of other farmland wildlife at the same time.”

The stone curlew study was carried out on arable fallow plots in Wiltshire, Hampshire and Berkshire and was published in the journal Biological Conservation.

The cirl bunting study was carried out on extensively managed pastures and fields of spring sown cereals in Devon and was published in the journal Biodiversity and Conservation.

Martin Harper added: “Despite these encouraging results, there is still a real need for targeted scientifically-backed conservation measures designed to help non-bird species. Conservationists, farmers and Government agencies all have a role to play in creating space in our countryside for all threatened wildlife, whether birds, bats, bees, bugs or butterflies. “This work underlines how important publicly funded agri environment schemes are in our efforts to halt the loss of biodiversity in the UK. This is why we were delighted that the UK Government last week argued for more support for wildlife-friendly farming in recent negotiations about the Common Agriculture Policy. Any cuts in these schemes would be bad news for wildlife, farmers and rural communities.”