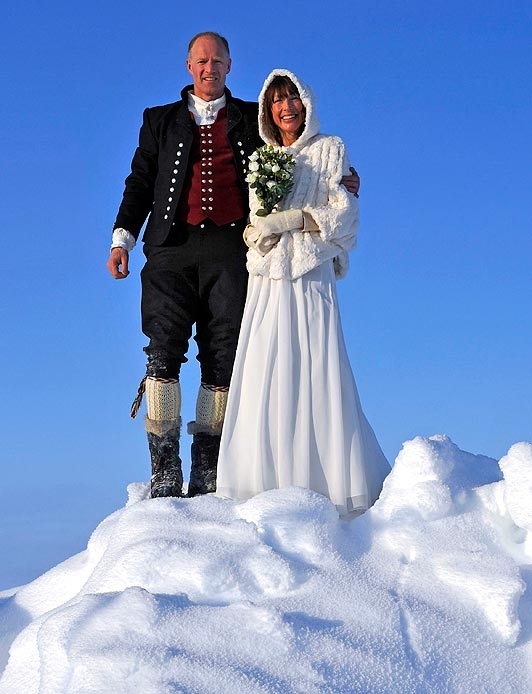 Arctic explorer Borge Ousland, 49, whisked his bride-to-be off to the northern-most point on Earth.

And there — with a party of 15 including the best man, bridesmaid and a helicopter crew — Borge married fiancée Hege, 35.

It means the Norwegian and his new wife are the first people to say “I do” at the top of the world.

Borge, from Oslo, Norway, said: “The North Pole is a big part of my life so I felt it needed to play some part in my wedding too.

“For me it was all about marrying the woman I love in a place I love.

“It was a very emotional ceremony. Everyone has said it is a very fitting location for me to wed because of my job.”

The couple endured temperatures as low as minus seven degrees celsius as they tied the knot in April.

The lovebirds flew from Oslo to a group of islands just north of Norway, where they then boarded a Russian research aircraft to the Barneo base.

Sealed with a kiss … Borge and Hege cement their vows

From there they hopped in a helicopter which took them and their guests directly to the North Pole.

Borge added: “It was my idea because I spend a lot of time in the Arctic and it seemed the perfect place for me to marry.

“I mooted the idea subtly to my wife, Hege, to test the waters. And when she said it was a fabulous idea i got to work straightaway trying to make it happen.

“Thankfully we found a priest called Dag Henrik Berggrav who was willing to marry us.”

The explorer, who has completed dozens of trips to the chilly frontier, added: “There were 15 people present in total.

“But that included the helicopter crew who ferried us up to the North Pole.

“Just as it finished something truly bizarre happened — a solo skier just happened to be passing.

“Mark came along and shared a glass of champagne with us and passed on his congratulations.

“It was very surreal — we were in one of the remotest places in the world and there was this guy casually skiing along.

“We then headed back to the Russian research base and had a big party there.”

Borge and Hege are now set to jet off to the much sunnier climes of Italy for their honeymoon.

Spread the love
2012-05-30
Previous Post: Arlington Police Make 7 yr old with leukemia Batman for a day
Next Post: TED Talks: How to live to be over 100