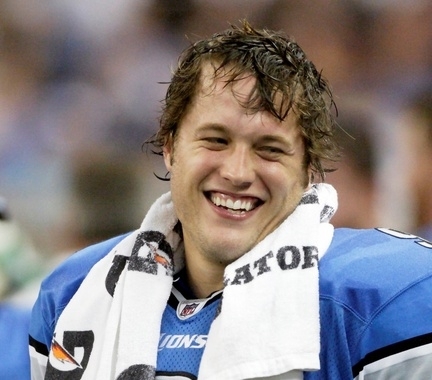 Matthew Stafford attended the Griese-Hutchinson-Woodson Champions for Children’s Hearts weekendto benefit the University of Michigan C.S. Mott Children’s Hospital. Before he left, the Detroit Lions quarterback reached into his pocket and made a huge difference in the life of a family.

After befriending Mott patient Faith Falzone and her brother Will, Stafford learned that his family liked to visit Chicago and were big Lions fans. According to Faith and Will’s mother, Mary Ann, Stafford and his girlfriend took a genuine interest in the family.

The auction started, and a “Monday Night Football” package for the Lions game at Chicago from ESPN’s Mike Tirico came up. Retired NFL linebacker and Michigan alum Dhani Jones, who was serving as auctioneer, asked Stafford to throw in some game tickets. Stafford agreed and donated six tickets.

When the bidding began, Stafford joined in. Will and Faith’s mother was surprised to see this:

Suddenly, the Lions own quarterback began bidding on the package, Dhani teased about being able to watch and play at the same time, saying I know you were good last year, but man that is talent. I assumed he was driving the price of the package up, all the money goes to Mott, I thought it was incredibly cool of him. As the bidding continued he wasn’t backing off… he was in it, he wanted to win that package, and had I known why, I’m certain, I would have been in tears. Somewhere in the $15k range  Matt Stafford was the owner of the MNF package, the crowd laughed, but moments later, that same crowd would be giving the Mott newcomer a standing ovation. As he won the package he turned to Will and said, there you go buddy, you go to Chicago, and take your family. The look on my sons face, I will never forget. His chin began to quiver, he was about to cry. He quickly jumped up and gave Matt a hug, and thanked him over and over again.

Not only had Stafford just donated game tickets and $15,000 to Mott Children’s Hospital, but he also gave a special gift to a family who has been through so much. He told the Detroit News that he wanted to give them something to look forward to:

“They have been through so much in the past couple years, and to see how much they all supported each other and faith through their tough times was really inspiring,” Stafford said in a text message. “I wanted to give them something they could really be excited about and something I know they deserved.”

There isn’t much left to say except kudos to Stafford. It’s clear that he didn’t make the donation for pats on the back, which makes his gift even more special.