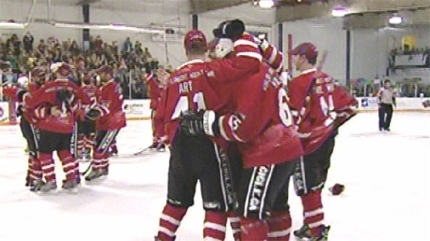 Not only did 40 hockey players set a new world record for the longest game ever played, they also surpassed their fundraising goal.

It was a grueling 10.5 days at the Chestermere arena which ended Wednesday evening.

When the final whistle blew, a cheque for $1.4-million was presented to the Alberta Children’s Hospital Foundation.

But the spirit of the game clearly captured the hearts of those who watched. On Thursday, another $100,000 came in, pushing the team over their $1.5-million goal.

Having reached both goals, players are now finally putting their feet up.

Travis Dashkewytch was about five days into the world record attempt when he developed pneumonia and was rushed to the hospital for treatment.

“After I got back from the hospital they quarantined me into a different dressing room that was all by myself. I was all by myself, it was better sleeping arrangements than it was over in the curling rink,” says Dashkewytch.

His brother Troy faired better but is still feeling the effects of playing 246 hours of hockey.

“My wrists, my knees, my ankles, my back are really sore and stiff. I’m probably going to hit a bath at some point,” says Troy who is also glad he has the next four days off from work.

Alex Halat is recovering from the marathon game by spending time watching hockey with his son Noah.

“I sound sick, ironically I’m not sick. I went to the doctor. There’s no cold, no flu, nothing. The injuries are one thing but it’s the breakdown of your body, I fell like I’ve been hit by a truck,” says Halat.

Halat says the group of 40 players will likely get together after they heal. Except this time the sport of choice will be a round of golf.

Donations are still being accepted for the Alberta Children’s Hospital Foundation. For more information, click on the link to the right.

Spread the love
2012-06-02
Previous Post: There is Good News in the World
Next Post: Rescued refugee becomes Coast Guard rescuer