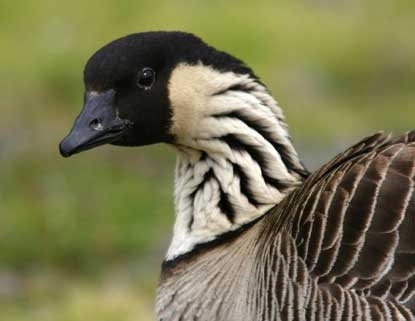 Hawaii’s state bird was once so endangered, there were just 30 left on the planet.

Now, the Aloha State is spending hundreds of thousands of dollars a year to move hundreds of geese away from runways at the airport in the Garden Island of Kauai.

Officials want to keep the gray, brown and white-feathered geese known as nene (pronounced neigh-neigh) from disrupting flights to an island that welcomes more than 1 million visitors a year. Or worse, endanger passengers like when a bird strike knocked out both engines of a U.S. Airways jet, forcing it to crash-land in New York’s Hudson River in 2009.

In the past few months, state workers snatched nearly 300 geese from the fairways and ponds of a golf course next door and sent them to Maui and the Big Island on helicopters and a Coast Guard plane.

It’s an unusual problem for Hawaii, where nearly all native birds are in danger of becoming extinct. The small island state is home to one-third of the nation’s endangered avian species.

“It’s great to reach the point in the recovery where your biggest problem is you have too many birds,” said Scott Fretz, wildlife program manager at the state Department of Natural Resources. “I wish I had similar problems with more of our endangered species.”

Hawaii’s birds, like many of its native plants and animals, are struggling in today’s globalized world because they evolved in isolation on islands far from continents. They’ve been devastated by introduced diseases like avian malaria, and introduced predators like cats and mongoose.

The state has established safe spaces for the nene to nest in Maui and the Big Island by setting up fences to keep out mongoose and other feral animals. The state moved them to other islands because geese taken to other parts of Kauai — a lush isle where the George Clooney film “The Descendants” was partially filmed — in the past always seemed to find their way back to the lagoons near the airport.

The state Department of Transportation was spending more than $400,000 a year to chase away nene and other birds, and has budgeted $4.7 million to move them over five years, though Fretz said the project is so far under budget.

Scientists believe nene are descendants of Canada geese that flew here nearly 1 million years ago. Since there were no predators to harass them in Hawaii, they’ve evolved weak defenses since their arrival.

Female nene use a lot of energy while nesting, and metabolically slow down to the point where they’re basically “half-sleeping,” he said. When cats and mongoose — a weasel like animal native to India — come along, they can easily drive nene mothers off their nests and eat their eggs.

The nene also lost habitat to human farms after Polynesians arrived in Hawaii about 1,000 years ago. Unrestricted hunting after the first Europeans arrived in the late 1700s took out more.

Determined efforts to breed them in captivity and release them back into the wild, which began in 1949, have boosted the population to more than 2,000.

The ones that found their way to the Kauai Lagoons resort next to Lihue Airport thrived amid 38 acres of lagoons and a 27-hole golf course. The nene population there exploded from just 18 birds in 1999 to about 400 last year.

Between 2008 and 2010, officials reported seeing nene more than 5,000 times at the airport. Most of them were at the southern end of one runway, a critical area for airplanes landing and taking off.

Wildlife biologists use big nets to grab some of the birds. Others they carefully herd into pens by walking or riding a kayak alongside them in the lagoons.

A few dozen were flown by helicopter to a private ranch on the slopes of Haleakala volcano on Maui. A Coast Guard C-130 and other aircraft flew the rest to the Big Island, where they were taken to the Hilo Forest Reserve.

George Wallace, who works on seabirds and island birds at the American Bird Conservancy, said the nene’s prospects are so good they may move out of the endangered category.

“I’d be willing to believe, if we give it a few more years, that it’s a species that we might see delisted someday — which would be an amazing, and I think psychologically a really great thing for Hawaiian birds,” he said.