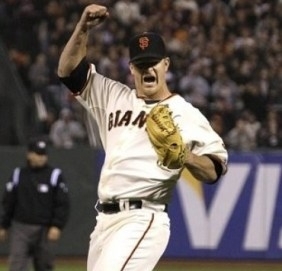 (CNN) — San Francisco Giants pitcher Matt Cain threw a perfect game Wednesday night in a 10-0 victory against the Houston Astros, the first pitcher to achieve that feat in Giants history.

“This is unbelievable,” Cain told reporters after the game. “This is part of history. Something I am going to remember forever and ever.”

Cain’s perfect game is the 22nd in Major League Baseball history and he accomplished it with style, striking out 14 batters.

The early part of the game featured little drama as Cain dominated Astros hitters, and did not come close to giving up a hit.

But in the seventh inning, Giants outfielder Gregor Blanco saved the perfect game by chasing down a screaming drive hit by the Astros Jordan Schafer and making a diving catch on the warning track.

The dazzling catch also put Blanco in the spotlight as his name was trending on Twitter nationwide along with Matt Cain’s some 20 minutes after the game.

Cain’s feat comes the same night that New York Mets pitcher R.A. Dickey narrowly missed a no hitter. Dickey held the Tampa Bay Rays to only one infield hit Wednesday night, and did not walk a batter.

There have now been five no hitters this year. Along with Cain and Humber, Jered Weaver, Johan Santana and a crew of Seattle Mariners also pitched games without allowing a hit.

The win improved Cain’s record to 8-2 for the season and dropped his earned run average of 2.18.