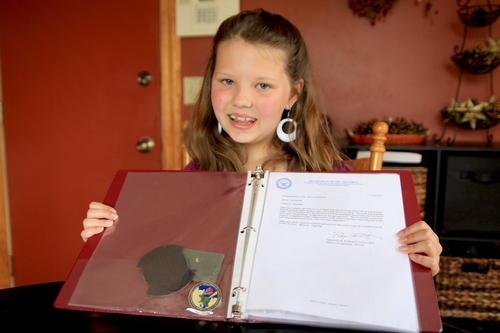 Thanks to one Rosemount second grader, Girl Scout cookie season made it to Afghanistan this year.

Bella Johnson, a student at Shannon Park Elementary School, was in the middle of selling cookies earlier this year when she decided she wanted to do something to help other people. She wasn’t sure exactly what she wanted to do at first. She just knew she wanted to help.

“I thought for a couple of days and I decided I wanted to help soldiers, because we were talking about how hard it was over there,” Johnson said.

Tim Roberts, a former neighbor and friend of the family, has served three tours as a member of the Air Force’s Flying Vikings. Johnson’s own father served eight years in the Army.

“He tells me stories about how bad it was,” Johnson said. “He said the worst thing was the spiders and the snakes.”

As she made her rounds, Johnson asked people if they wanted to buy an additional box of cookies to send overseas. Very few people turned her down, and a few who didn’t want cookies for themselves bought a box to donate. By the time she was done, she had gotten about 450 boxes donated. The Girl Scouts added another 400, and when Roberts made a trip back to Minnesota carrying wounded soldiers, she sent the cookies with him for the return trip.

Johnson had done community service projects before through Girl Scouts, but never anything quite like this.

“I was older. I thought I was more capable of doing something bigger than I could when I was a Daisy Girl Scout,” Johnson said.

Johnson got to see the fruits of her efforts two weeks ago when Roberts’ wife delivered a package of her own. In a binder, Johnson now has letters from Roberts and from a medical director who has been handing the cookies out to wounded soldiers. Both thanked her for thinking of the soldiers. She also got patches from their uniforms and a camouflaged tube of lip balm. Johnson received the delivery at school.

The delivery, like the project that inspired it, was well received. It might even have inspired more good deeds.

“I was kind of really proud,” Johnson said. “I told a lot of my friends about it. They said they want to do something as good as I did.”