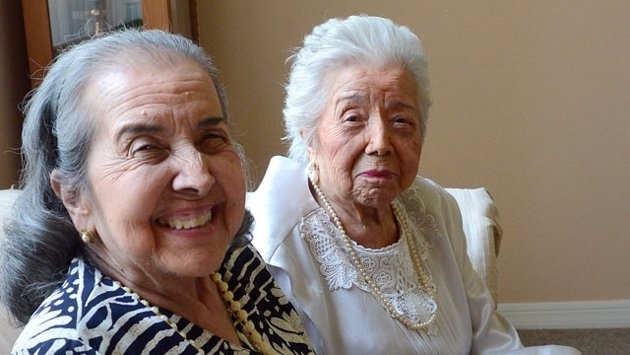 It’s a deal that has worked throughout human history: Your parents take care of you when you are little and you return the favor when they are old.

But sometimes the usual arrangement is turned on its head.

Maria Garcia is 87 years old. After a rich and rewarding life, she is now suffering from dementia. The person she depends on more than anyone else in the world… is her mother.

Her mother, Rosario Schielzeth, turned 104 this week. Her daughter had to be reminded every few minutes who the birthday balloons were for. And Rosario didn’t mind answering, every time.

“She has the patience of a saint,” says Maria’s son and Rosario’s grandson, Albert Garcia.

Albert, 60, describes his mother’s condition as “happy clammy dementia,” because she is never angry or upset. But like anyone with Alzheimer’s Disease, she can be trying, asking the same questions over and over.

“My grandmother has to live with her 24-7,” Albert says. “Not once have I seen her roll her eyes or answer curtly.”

Since Rosario gave birth to Maria in 1925, the two women have almost never lived apart. When Maria was starting her own family, she had her own home, but it was across the street. And most of her life, she and her mother have lived under the same roof.

These days, that roof is in Sarasota, Fla. Every morning, the two women sit down to a leisurely breakfast. Rosario reads the paper and tells her daughter what’s going on in the world, to keep her mind sharp.

Rosario herself has no trouble with her memory, or with anything else. She needs a walker to get around, but she doesn’t wear a hearing aid. She doesn’t even need glasses after having cataract surgery a few years ago. Apart from vitamins, she takes only one pill a day, a mild blood-pressure medication.

When people ask what’s kept her going all these years, she tells them she watches what she eats and stays away from doctors.

Rosario has been taking care of other people her whole life. When she was a girl, living in Costa Rica, it was her siblings. She was one of ten children, so the older ones had to pitch in. Then it was her own children, and then her grandchildren.

When Albert was a baby his musician father, whom he describes affectionately as “a Puerto Rican Clark Gable with a pencil moustache,” ran off with a stewardess. His grandmother, living across the street, “did the wash for both houses, cooked for both households,” so his mother could go to work.

Not that her whole life was self-sacrifice. She had a passion for travel and even though her husband didn’t, she managed to see much of the world.

He earned enough as a cabinet maker to support the family, so she went to work as a seamstress to earn travel money. With her girlfriends she took off for Thailand, Venice, Rome, Switzerland….

These days her journeys are more proscribed: the movies, the mall, the beach for ice cream.

But she can still enjoy her other great passion: Bingo. She and her daughter play at least six rounds every night.

Carol Festari, a live-in caretaker for both women, also joins the games. She says Rosario wins nine times out of ten.

They play for candy, to Rosario’s regret. “Imagine if we were playing for money,” she tells them. “You’d both be broke.”

Festari says the first thing Maria says when she wakes up and the last thing she says before she goes to bed is, “Where’s my mother?”

Her mother is always there.