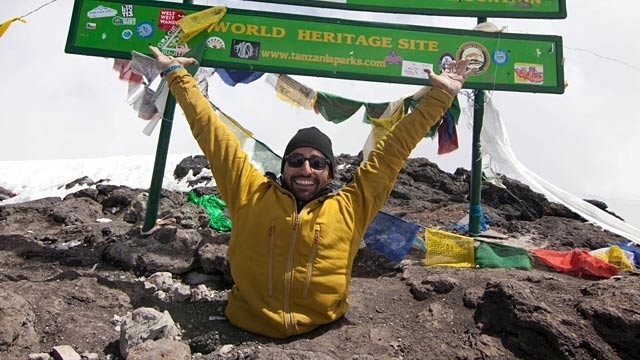 For most people, climbing Africa’s tallest mountain is an impossible achievement. But how about doing it without legs?

For Spencer West, nothing is impossible. Or as he would put it: everything is possible.

Nearly all of the 31-year-old American’s life has proven the doctors wrong. When they amputated both of his legs right below the pelvis when he was 5, they warned that he would never be a functioning member of society. But West has led not only led a life that is remarkably normal compared to his doctors’ prognosis – he has accomplished feats that, by any measure, are extraordinary.

Nothing is more extraordinary than his latest accomplishment: taking 20,000 “steps” to the top of Mount Kilimanjaro in Kenya. Elevation: 19,300 feet. He climbed 80 percent of it on his hands – propelling his torso forward, one hand after another, along the trail for eight days. In a conversation with ABC News on the phone after he descended, his voice sounded strong – but he admitted his arms were a little sore and his hands a little cut up and bruised.

“It’s literally climbing the largest mountain on Africa on your hands,” he said. “I don’t know if it can get much more challenging than that.”

“To use myself as an example – that if I enter life without legs and climb the largest mountain in Africa and overcome that challenge, what more can you do in your daily lives to define what’s possible for you?” he asked. “We all have the ability to redefine what is possible — whether you’re missing your legs or not. Everyone has challenges and challenges can be overcome.”

Even before Kilimanjaro, West had already overcome so much. He was born with a genetic disorder called sacral agenesis, which left his legs permanently crossed and his spine underdeveloped. He had two operations as a baby; the second cut off his legs for good.

But he says his parents instilled him with confidence that he could do anything he wanted, and that has given him the “strong backbone” that he was born without.

“From the day I was born they treated me just like everyone else, and they wanted me to have the same dreams and aspirations as everyone else did,” he said. “I’ve just always seem myself as a regular person. I’ve never seen myself as a person without legs. I’m only reminded of that when I’m out in public.”

He graduated from college and landed a well-paying job as an operations manager for a salon and spa. He drove a specially designed car that he could control with his hands, owned a house, and had a good life. But it took a trip to Kenya with the charity Free the Children to help him realize that he wasn’t happy.

He realized he wanted to do more from his life and returned to Kenya a second time. There, he remembers being confronted by a little girl. “She said to me, ‘I didn’t know white people had conditions like yours.'” He realized that his life might be an inspiration for others.

“I wanted a job that not only paid well, but made the world a little bit of a better place,” he said today by phone. “That’s what I found in Kenya – not only how to use my story as a career, but then how to use that to give back to these incredible people that have given me so much. And that is wasn’t really so much about material possessions, but actually helping others that made me happy.”

He became a motivational speaker for the organization Me to We, founded by the same people as Free the Children, and started encouraging audiences to overcome their challenges. He decided the climb Kilimanjaro to raise $750,000 for the Kenyans who had “helped me find my passion,” he said.

The money would build three boreholes and provide clean water to hundreds of thousands for those who have been struggling from Africa’s worst drought in 60 years. In Kenya and the surrounding countries, the drought has poisoned millions of Africans’ clean drinking water and killed off livestock that was once their sole source of income. Increasingly, children are being forced to work at home instead of go to school.

It took West and his two best friends one year to train to climb Africa’s tallest peak.

The day he saw the peak, he says, will be one of the most memorable of his life.

“The moment the summit was within sight was incredible,” he wrote on his blog during the ascent. “After seven grueling days of relentless climbing, after 20,000 feet of our blood, sweat and tears (and, let’s face it, vomit) we had actually made it. We were at the top. The summit sign seemed almost like a mirage.”

But it was not a mirage, and West redefined what was possible for him – and, he hopes, for anyone who comes across his story.

“Small things like learning to swim, or learning to drive standard for the first time, or maybe even it’s taking an hour and reading to their kids,” he said. “Small little steps to redefine what’s possible in their own lives as well, as I’ve done with mine.”