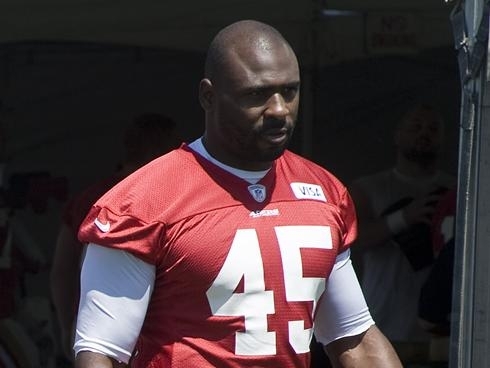 NEW YORK (WFAN) – Remember Joe Armento, the 6-year-old Giants fan who tried to lure Brandon Jacobs back to New York with the pickings from his piggy bank?

Turns out the running back, now with San Francisco, paid him back on Wednesday — and then some. The youngster got a $5 bill from Jacobs, a signed helmet and a day of fun that he’ll never forget.

“He had some interest in there just for being a good kid,” Jacobs told the Sacramento Bee. “He’s worth a lot more than that $5 bill I gave him.”

Jacobs, who originally said he might treat Armento to Chuck E. Cheese, took Joe and the little Giant’s 4-year-old brother, Nick, to the Jump On In bounce house in Boonton. Jacobs’ 5-year-old son, Brayden, made for three little kids on hand — and one big one.

The 29-year-old, who wasn’t always the most popular player in New York, said he was touched by Joe’s heartfelt plea.

“I’m at a point in my career when people have stopped believing in me and not believing that I can still play,” he said. “But that’s not the case. Joe believes in me, gave me a lot of confidence and a lot of want-to.”

Joe’s mother, Julie Armento, posted an image on Twitter of the signed Giants helmet. Jacobs inscribed it with his old No. 27, not the No. 45 he wears with San Francisco.

“Thank you (Jacobs) for giving joe and our family a lifetime memory,” she tweeted. “There will never be a better bounce house visit.”

Jacobs also tweeted a photo of the bounce-house gang: “The Armento family is great, God bless them and I wish them the best.”

Is this the feel-good story of the day or what?! Be heard in the comments below!