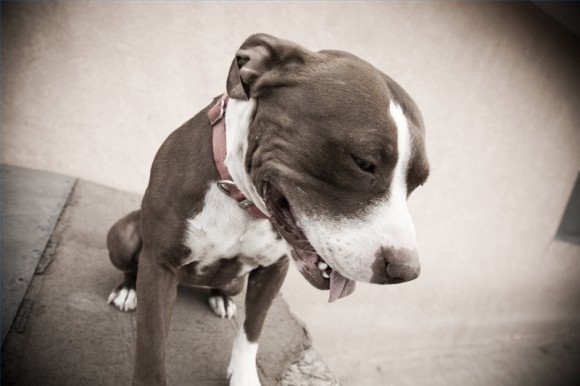 They say all dogs go to heaven and Titan, a pitbull in Atlanta is showing why.  This isn’t the 1989 animated film starring Burt Reynolds, this is real life.

In July of 2011, John Benton was about to head out the door to go to work and sent their dog upstairs to sit with his wife, Gloria Benton, who was recovering from back surgery.  Titan who is normally a calm dog, immediately started barking and running back and forth between their bedroom and the front door.  He blocked the front door so John could not get out.  John figured out that Titan was trying to tell him something was wrong and went upstairs to discover that his wife had fallen from an aneurism and fractured her skull.

John Benton told Fox Atlanta, “What the doctor said, had it not been for this dog, if he had let me leave that house, she would have either bled to death or the aneurysm would have killed her. And it’s a, like I said, we owe a whole lot to this little rascal. It’s not about the breed but the way they are raised”.

Titan came to the rescue once again in May 2012.  He woke up John early one morning and led him to the bathroom where Gloria had fallen and broken her hip.

Talk about a special dog!  It’s really wonderful to hear heartwarming stories about animals and their roommates 🙂