By: Jon
In: Lifestyle
Tagged: grant, pay it forward, superhero 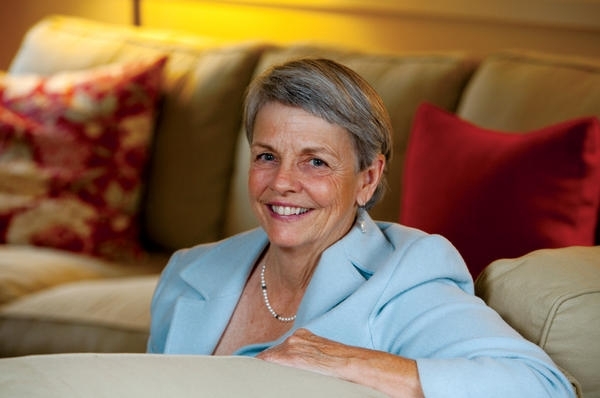 Boston (CNN) — Johanna Crawford was volunteering for a domestic violence shelter in 2003 when she answered a hot line call she will never forget.

On the other end of the line was a petrified woman who had just arrived in town after fleeing her husband. She said he had abused her physically and emotionally for years.

The woman had her two young children with her, along with two trash bags that carried all their belongings.

“They had gotten on the first bus out of town, and here they were,” Crawford said. “They knew nobody. And we had a bed (at the shelter), we had a room. So I picked her up.”

The woman didn’t have a dollar to her name. And because she left so fast, she didn’t have identification or her children’s birth certificates — things that she would need to start her new life.

The woman needed $40 to get the documents she needed. Crawford decided to help.

“It is totally forbidden for staff or volunteers to give clients money. But I’ve never been very good with rules, so … I gave her the two $20 bills,” she said.

Crawford gave her a third $20 for mailing expenses and told the woman to treat her kids to McDonald’s with the leftovers.

“She was blown away,” Crawford said. “And I was thinking, ‘I just changed a life — three lives and many generations of lives, perhaps — with $40.’ And it felt great.”

A year later, Crawford founded Web of Benefit, a nonprofit that awards grants to female survivors of domestic violence. The grants, which average $500, allow each recipient to take the first step into her new life.

Some women use the grants toward a security deposit on an apartment. Others buy a computer to access online education and job postings. Grants also help pay for child care, transportation or materials to start small businesses.

“These women (need) to know that they deserve their dream and have the power to create it,” said Crawford, 65.

In the United States, 74% of female domestic violence victims have stayed with an abuser for economic reasons, according to the Mary Kay Foundation.

“There is a reality that women go back to abusers because … the financial hardship is horrific,” Crawford said. “What they have left is shattered dreams. … It (takes) about six months to have the stability and the emotional and psychological well-being to be able to take the next step toward the rest of their lives.”

That was the case for Suzie, who sought an order of protection and later a divorce from her husband after months of sexual and physical abuse after her immigration.

These women (need) to know that they deserve their dream and have the power to create it.CNN Hero Johanna Crawford

“I couldn’t speak any English,” said Suzie, whose real name is being withheld to protect her identity. “I was just lost. I had no money. I had nothing. I couldn’t see the future.

“When I met Johanna, I was so happy. She said she would help me to buy materials and the sewing machine I needed (to) create a small platform for myself, which made me so grateful.”

Women are referred to Crawford’s group by advocates at dozens of shelters and agencies that serve the survivor community. This ensures that the first and most strictly held grant requisites are met: that the applicant has been free of her abuser and any substance abuse for at least six months.

Applicants and their advocates complete what Crawford calls a “dream proposal,” which is the description of the survivor’s ideal life. Crawford then meets with each applicant to help her lay out the plan for how to achieve that life, identifying each of the steps required.

Crawford oversees each grant personally, delivering the money directly toward the item, program, school, hospital or landlord it will pay. In all, she has given more than 1,000 grants totaling more than $600,000 to women in Boston, where Web of Benefit is based, and Chicago, where the nonprofit has expanded.

Most of the group’s funding comes from private individuals and foundations. Crawford has also put in a lot of her own money.

As a child, she experienced domestic violence in her own home, and she said she once witnessed her father nearly kill her mother. She and her older brother managed to stop the attack, and the family was able to separate from him.

“(My mother) was lucky that she was financially OK, because at that stage, there were no shelters,” Crawford said. “Had he kicked us out of the house, we would have been homeless.”

Grant recipients in Web of Benefit are required to complete three good works to support other survivors like themselves. Recipients help one another with things such as child care, job training, career guidance and transportation, growing the “web of benefit” community exponentially.

Suzie has already taught another survivor how to sew, a skill she used to build her thriving tailor business.

“Watching Johanna,” Suzie said, “made me realize I should be a person who not only receives help but someone that can pay it forward. A person that helps others in need, like how I needed Johanna.”

Crawford says she hopes her efforts to empower women can ultimately help stop the cycle of violence.

“One woman can make a difference,” she said. “But women working together can change the world.”

Want to get involved? Check out the Web of Benefit website at www.webofbenefit.org and see how to help.