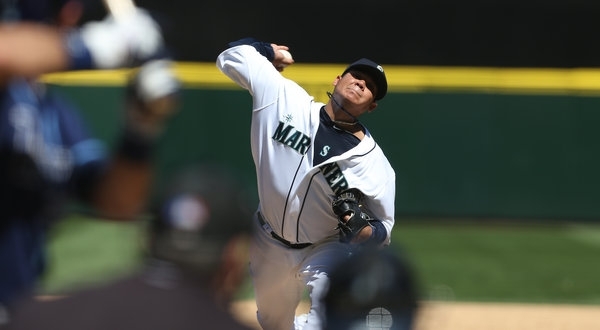 NY Times – In what has become the year of the perfect game, Felix Hernandez of the Seattle Mariners added his name to the list Wednesday, marking the first time that three pitchers have pulled off the feat in the same season.

For a man nicknamed King Felix, Wednesday’s performance is what Mariners fans have been waiting for since he made his debut as a 19-year-old in 2005. Hernandez, a right-hander and native of Venezuela, did it in style, striking out five of Tampa Bay’s last six batters. The final out came when Sean Rodriguez looked at a called strike three.

Seeming to get stronger as the game progressed, Hernandez reached a three-ball count only three times in the game. His toughest challenge came from Matt Joyce in the seventh inning. Joyce took Hernandez to eight pitches before grounding out on a cut fastball.

From that point, Hernandez cruised to a 1-0 victory over the Rays, although the Mariners’ lone run did not give him much of a comfort zone.

Safeco Field was half full for Hernandez’s masterpiece, although the crowd of 21,889 kept it noisy as the game went on.

Each two-strike count was greeted by “K, K, K, K” chants from Hernandez’s personal cheering section, the King’s Court, and Hernandez rewarded them with 12 strikeouts, two short of the record for strikeouts in a perfect game held by Sandy Koufax and the San Francisco Giants’ Matt Cain.

Cain’s own 27-up, 27-down effort came two months ago against the Houston Astros.

A feat accomplished only 23 times in baseball history, and 21 times in the modern era, the perfect game is still among baseball’s rarest accomplishments despite the recent spate of them, including the two in 2010 by Oakland’s Dallas Braden and Philadelphia’s Roy Halladay.

Hernandez’s perfect game was also the third no-hitter thrown at Safeco Field this season. The other two were a combined June 8 no-hitter by the Mariners against the Los Angeles Dodgers that featured six Seattle pitchers, and the perfect game by Humber.

The only other season in which there were three no-hitters in the same year in the same park was in 1917, when the White Sox and the St. Louis Browns took turns victimizing each other at Sportsman’s Park in St. Louis.

Hernandez addressed the crowd after Wednesday’s game, saying Humber’s perfect game inspired him to throw one of his own.

“I’ve got to throw one; I have to,” he said of his reaction to watching Humber. He then gestured to the crowd and said: “There it is. For you guys!”

The subject of trade rumors over the last year as the Mariners have languished at the bottom of the American League West, Hernandez has four shutouts since June 28 and is 11-5 for the season.

The Rays’ performance was the third time in four seasons that they were on the other side of a perfect game and the fifth time they have been no-hit in some fashion since 2002. Only the Dodgers had had three perfect games thrown against the team, with one of them being Larsen’s in the World Series.

The Rays continue to be victimized even as they have established themselves as a consistent contender in the American League. But the Rays’ strength is pitching, not hitting, as demonstrated by all the times they have failed to get a hit over nine innings.