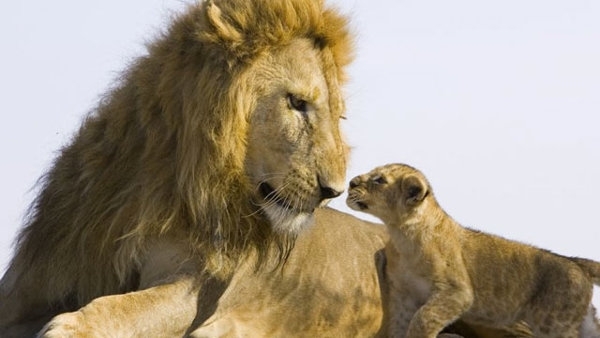 Lions are known as some of the most ferocious animals on the planet, so a tender moment between a father and his cub captured on camera in the wilds of Africa is generating a lot of buzz.

“The lion photos have hit it quite big because it’s the cub meeting his dad for the first time ever,” said the wildlife photographer who captured the meeting, Suzi Eszterhas. “It’s a major part of a lion’s life growing up.”

This particular cub met his dad for the first time after seven weeks with his mom.

“When lion cubs are babies, the mom keeps them in a den for the first six to eight weeks of life, and it’s during this time that she keeps them very hidden,” Eszterhas told Goodmorningamerica.com. “After, she will bring them out and introduce them to the pride. It’s at that point they meet dad for the first time.” 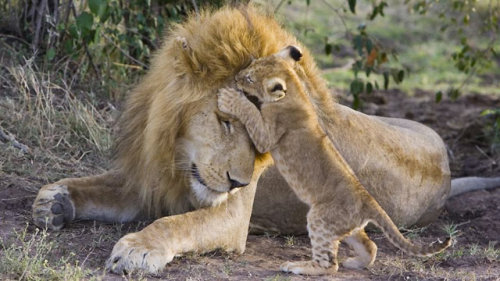 (Courtesy: Suzi Eszterhas)Eszterhas was able to capture such a rare moment by embedding herself with the pride of lions on the Masai Mara National Reservein Kenya for three months while she was living in Africa for three years. This particular series of photos was captured in 2008 or 2009, she said.

“That was literally the moment the cub first saw his dad ever,” Eszterhas said. “He kind of walked up shyly and then the dad immediately tried to play with him and the mom is watching the whole time to make sure the dad behaves. The whole moment is really special.”

The California-based photographer spends nine months of the year in the field, documenting wildlife around the world.

“I spent a lot of hours just sitting with these animals watching them from sunrise to sunset,” said Eszterhas, who traveled alone around the reserve in a Jeep taking photos. “Very quickly you just become a part of the landscape and they don’t notice you at all. You’re always safe but you’re quite close to them and they get quite used to you.”

The lion photographs have been published in “Lion,” the latest edition of her six-title series of children’s books, titled “ Eye on the Wild,” which documents an animal’s life from infancy to adulthood in photographs.

Other editions have focused on bears, gorillas and cheetahs.