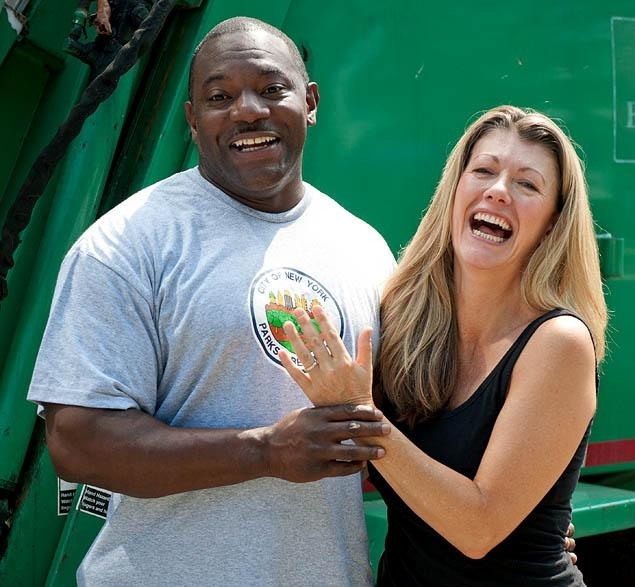 GARY GADDIST is an unassuming and hardworking city Parks Department worker who picks up trash in lower Manhattan five days a week.

But to Danielle Hatherley Carroll, Gaddist is lord of the ring.

On her behalf, Gaddist went on a quest to find the wedding ring she had lost in the garbage. And against all odds, he found it.

“It really was like looking for a needle in a haystack,” Gaddist said Thursday.

Carroll said her gold band has nine little diamonds embedded in it, but Gaddist is the real gem. “This guy did something he didn’t have to do, and I find that amazing,” she said.

The story of how Gaddist reunited Carroll with her ring began sometime Sunday, when she first lost it.

“I’m a painter who takes people on outdoor painting adventures around New York City,” said Carroll, 45, who moved here six years ago from Australia. “On Sunday, I was teaching a painting class in Battery Park all day.”

Painting is messy work, so Carroll brought along a clear garbage bag where she and her students dumped their rags after cleaning up with a “slippery hand cleaner.”

“I was so busy that day and cleaning my hands constantly that I didn’t notice I had lost the ring,” she said.

It wasn’t until 3:30 a.m. Monday when Carroll woke up in her East Village apartment that she realized “the ring was gone.” Her husband, Steve Carroll, bought the band last year to celebrate their 10th wedding anniversary — and to replace one she lost years ago.

“I didn’t want my husband to get upset with me, so I was going to sneak out and find a police officer to help me look,” she said. “But he awoke and said, ‘You’re out of your mind. I’m coming along to help you.’ ”

They drove back to Battery Park and found the garbage container where she had dumped the trash bag.

“Sure enough, it had been emptied,” she said.

Carroll said she was on the verge of tears when her hubby spotted a city Parks Department trash truck around 5 a.m.

“I said, ‘I’ll bet you anything it’s in there,’” she said. “We walked over and nobody was inside. So I wrote a note.”

It began: “Hello, I believe my wedding ring is in this truck.”

“Then I put it under the front windscreen,” she said, using the Aussie expression for windshield.

“I found this note and it was great, just so honest,” the 42-year-old Brooklyn dad said. “So I called and she explained everything, about how she lost the ring, and how she couldn’t sleep after realizing it was gone.”

Gaddist, who has worked for the city for 12 years, said he told the couple it would be “iffy” but he would look for the ring. That was around 7:30 a.m. Monday.

“I had to go to Randalls Island, and when I got there I showed the guys the note,” he said. “They said, ‘If you want to look for a needle in a haystack, go ahead.’ ”

Gaddist said he’d collected thousands of pounds of garbage, which was now sitting inside hundreds of black plastic bags at a Parks Department facility on the island.

“Luckily, it didn’t take me long to find the one with the clear plastic garbage bag inside,” he said. “I took a shot and it was there.”

Around 8:30 a.m., Gaddist called Carroll with the good news.

“I was ecstatic, I started to cry,” she said. “I hopped in a cab and raced down to meet him.”

Asked why he would go the extra mile for a complete stranger, Gaddist said “it was a love thing.”

“She sounded like a nice person, and I could tell she and her husband love each other,” he said. “I’m glad I could help.”