(CNN) — My grandchildren and I made history this summer. It was our personal history; our family history. We made memories we’ll be able to relive and pass on to others.

The adventures began when I asked each of my three oldest grandchildren to pick a place he or she wanted to visit and do research on the fun activities the child and I could do there — just the two of us — for a week.

No amusement parks, no fancy hotels; my finances were limited because of a recent forced retirement, so we would be camping, as well as finding inexpensive or free things to do. The location had to be east of the Mississippi and require no more than one overnight stop to get there by car from our starting point, their home near Nashville, Tennessee.

It turned out only Rosa, 14, had enough decision-making experience to pick a spot (New Orleans — only slightly west of Mississippi), so I talked the possibilities over with the others — Savannah, 11, and Camron, 12 — until we decided on itineraries for their trips. 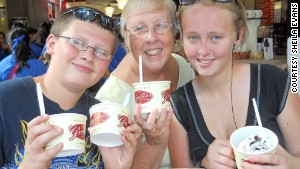 Sheila Evans and grandchildren Camron, left, and Rosa, right, dig into ice cream in Cincinnati, Ohio, where Evans picked Camron up for his week’s vacation with her in Michigan.

Savannah chose to go to Savannah, Georgia, and Hilton Head Island, South Carolina, doing lots of swimming and sightseeing. We included stops at her favorite aunt and uncle’s home in Atlanta along the way.

Camron did not feel strongly about a location, so he joined me at home in Williamston, Michigan, and helped me with some cat-sitting duties. Still, our time together included camping on Lake Michigan, climbing a sand dune and discovering or rediscovering lots of near and distant relatives.

Rosa was decisive about seeing New Orleans, and her research resulted in a whole list of places to go and things to see, all of them affordable. We covered everything on her list, plus more.

I had some concern that traveling with young teens or preteens might be tricky. Would they talk to me? Would they be bored? Would we enjoy the same activities?

Their excitement dispelled any misgivings.

Each one was happy going just about anywhere and eagerly anticipated their own “grandma time.” The chance to be special pals for several days overshadowed the importance of the actual destination on both sides, and I never heard one mention of being bored.

So consider a trip with your young relatives. Make memories. Here are some strategies that helped make these summer trips historical — and smooth — for us:

Stock up. Stopping at the grocery store was always among our first orders of business. Each grandchild got to select food he or she especially liked, keeping in mind that we would be cooking on my small electric hotplate. They were all very considerate of my needs as a vegan and tended to choose food we both could eat. We also splurged on simple treats that would withstand the rigors of long car rides and camping. 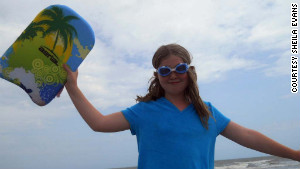 A board and goggles from Grandma were a hit with Savannah on Hilton Head Island, South Carolina.

Be curious. The grandchildren controlled the radio, but sometimes we turned it off and just talked to each other. Camron decided to ask me questions: “What is the most dangerous thing you’ve ever done?” Or, “Where would you go if you could go anywhere in the world?” After I answered, often with a story about his father as a child or my adventures living in Jamaica, I would turn the question on him, and he would regale me with his own dreams and adventures.

Join in. Memories were made when I actually got in the water, climbed the hill, let the birds land on me and generally participated first-hand in what my grandchildren were enjoying. Watching them play or taking pictures was nice, but something great happened when we were able to splash, race and float together.

Stay loose. Simple things were often the most memorable things. A ride on the trolley car, meeting new relatives, preparing a meal together and hearing one another’s personal stories were the things that the kids talked about long after the trip was over.

The limits on spending didn’t deter them, either.

Some of our best times were spent having dessert in an all-night coffee shop, holding a live chicken for the first time, finding an airport with the same name as Savannah, admiring the architecture in the French Quarter, naming rocks discovered on the beach at Lake Michigan and watching Grandma go nuts when the directions did not get us to where we wanted to go.

Rest. Down time was some of the best time. After a day of being on the go, a trip to the grocery store, a few minutes watching TV together, a swim in the pool or some other quiet activity were often ideal times to relive the fun of the day, plan the next outing or find that one more thing we had in common. Rosa cooking me dinner at the campsite, using shrimp we had bought in the French Quarter, was one of those low-key evenings that proved to be a high point.

Don’t overplan. Planning for each trip was essential, but some of the best opportunities to make history together came when we least expected them. Case in point: We ran into my sister at the local library and discovered that her grandson was visiting. Our two grandsons ended up spending the night together camping on my balcony and having their own adventures.

Are you a window flier or an aisle seater?

Share decision-making. Each grandchild was at a different level of maturity regarding making choices, but as their week progressed, I saw each one grow in their ability to come up with wonderful ideas, to be considerate of the needs of both of us and to choose among good options.

Stay connected to home. It was a surprise to me that at 11 and 12, Savannah and Camron each had a real adjustment to make being away from home, without parents or siblings to look to. Vannah brought along a framed picture of her parents, which helped her feel more secure. My cell phone served as a lifeline for both children, as well as for Mommy, who was suffering a little separation anxiety herself. Each day the children grew in their independence, and the phone calls got fewer and shorter as our time together stretched on.

Keep a record. To continue sharing our stories after the week was over, I purchased inexpensive thumb drives for each grandchild and saved all the pictures from their trip on their own drive. This way, we both would have copies of all the pictures. The day after we returned home, Rosa posted all of her 497 pictures on her Facebook page.

Listen. One of the experience’s unexpected blessings came when I was able to stay for a few days with the whole family after each trip. This gave me a chance to hear the stories of our trips from my grandchildren’s perspectives.

The extra bonus: I am now the “fun grandma.”