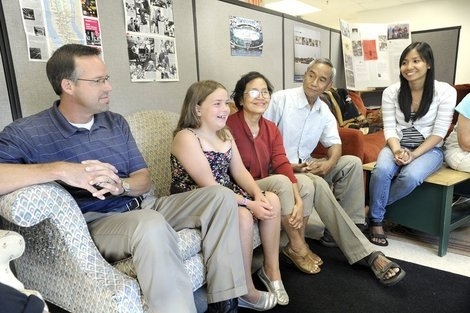 Ask yourself honestly: You find a big wad of cash on the ground, there are no surveillance cameras in sight, and nobody is watching you, what do you do? Jennifer Jacobson, a stay-at-home mom in Maine, admits that she had to think about it for a minute when her eight-year-old discovered $4,000 on the sidewalk by a Sam’s Club. As for her daughter Abbie? “It never crossed her mind to keep it,” mom tells Shine.

Abbie Jacobson saw the money spilling out of a small green cloth purse back in April. “She was so sad and sick to her stomach” thinking about the people who had lost it, says Jennifer. Dad John looked inside and, in addition to more than $4,000 cash, found some Cambodian currency, gold rings, and a debit card from the University Credit Union in Portland with the name “Ra Rim.” The family gave the money to the police and and called the bank leaving their telephone number.

Jacobson says her daughter, who started third grade on Tuesday, never expected any reward for turning in the cash. “Her teacher told the class about it on the first day of school and the other students clapped,” She says. “That was very nice for her.” However, mom says that when a reporter recently pressed Abbie on what she would do with $4,000, she hesitated then gushed, “see a Justin Bieber concert.” A few days ago, the forces of karma delivered: Abbie, her parents, and her older brother and sister learned they will be attending the sold-out show in Boston on November 10.

Back to April: The day after the family first turned in the cash, Ra Rim, who had been contacted by the credit union, called and invited them to lunch. When she saw the little girl, she started crying and ran up and gave her a huge hug. Rim and her husband Sa, who are Cambodian immigrants, explained they had been saving the money for a trip back to their country and they were supposed to leave the very next day.

Jacobson tells Shine, like many families, hers has struggled during the recession. “Abbie has severe asthma and spends four or five days at time on oxygen at the hospital in the winter,” says mom. She isn’t able to run and is left out of a lot of activities at school. “She takes a lot of medication and there are a lot of medical bills.” When the family learned how the Rims survived the brutal Khmer Rouge regime and spent four years doing hard labor in a prison camp, “It changes your whole perspective,” dad John told the Portland Press Herald, “In that way, I think they have given to us.”

The Rims were able to go on their trip and the Jacobson family thought the story was over—until about a week ago when Abbie’s good deed came to the attention of the Portland Press Herald via an email from Rosemarie De Angelis, an English instructor who teaches Rim’s daughter, Chansatha, at the local community college. The front page story mentioning Abbie Jacobson’s Bieber fever caught the eye of John Everets, the Chairman of the Board and CEO of the Bank of Maine. “This is a chance to do something nice for a beautiful little girl,” he reportedly told Renee Smyth, the bank’s Senior Vice President, who managed to score the concert tickets.

“A lot of people have asked us why Abbie gave the money back,” Jacobson tells Shine. “But we always taught our kids, ‘whatever is in your heart, you do the right thing.’ And it has paid off.” Mom says Abbie wants to start a blog where kids can share stories of hope and inspiration. “She’s humble, but I know that inside she’s beaming.”