High School student gives his $40,000 scholarship to other students

By: The Good World News Team
In: Sports
Tagged: basketball, pay it forward 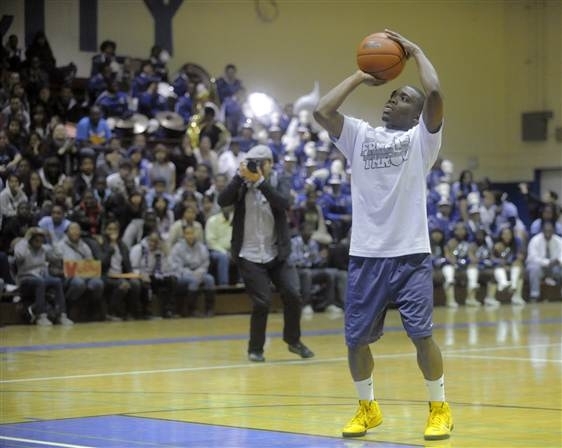 Allan Guei knows how to pay it forward.  He was not only was the star basketball player of Compton High School in LA, but he also had over a 3.0 GPA.  His high grade point average allowed him to be in a free throw competition to win $40,000 in scholarship funds.

The 18 year old went up against seven other classmates to win the competition.  Guei won the shootout by one basket and received the $40,000 in scholarship money.  Then the magic happened….  Allan Guei received a full ride basketball scholarship to California State University at Northridge.  This is where Allan showed people how good hearted he is.  Allan told his high school principal that he wanted to give the $40,000 to the seven other students that were in the tournament.  They decided to make the surprise announcement during their high school graduation.

Guei stated: “I’ve already been blessed so much and I know we’re living with a bad economy, so I know this money can really help my classmates. It was the right decision.”

In an interview with ESPN Allan said: “I was already well taken care of to go to school, to go to university for free.  I felt like they needed it more than I did.”

The seven runner-ups were ecstatic!  Omar Guzman, one of the runner-ups replied: “It was a shock. I’m really grateful there are people like that out there. It was generous.”

Donald Dotson, another runner-up said in a statement – “He’s going to go really far in life.  Because of what he’s done for us, God will bless him. That’s what life is all about — stepping forward to help other people.”

Allan Guei has truely changed the lives of many with a single act of kindness.