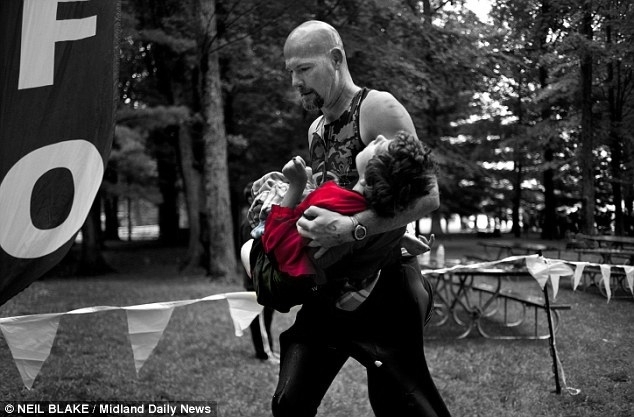 They call themselves “Team Maddy“.  The team consists of Rick van Beek and his daughter Maddy who has cerebral palsy.  Maddy’s cerebral palsy makes her unable to talk, see or walk.  In a blog post, Rick explains how he used to smoke two packs of cigarettes and chew a tin of tobacco every day.  He had been smoking since the age of 12.  But he stopped all of his unhealthy habits because of his daughter.  She helped him and he helped her.

Rick’s life turned around when he saw his daughter being pushed along through the Grand Rapids Marathon.  “To see her being so happy and enjoying every bump in the road was more than I could handle, my emotions took over.”, Rick said.  From that point on, he quick smoking and starting doing triathlons with his daughter.

Rick told TODAY, “It was that day that I realized, Madison is not a burden … she is a blessing that has changed our lives and so many other people’s.  Before Madison showed me the way to a healthy lifestyle, I guess you can say I was running away from it.”

Rick van Beek pulls Maddy in a kayak during the swimming portions and he rides with her attached to a cart during the biking sections.  The father daughter duo has participated in over 75 racing events.   This is one father daughter team that continues to inspire many!

Spread the love
2012-09-12
Previous Post: High School student gives his $40,000 scholarship to other students
Next Post: How to fly around the world