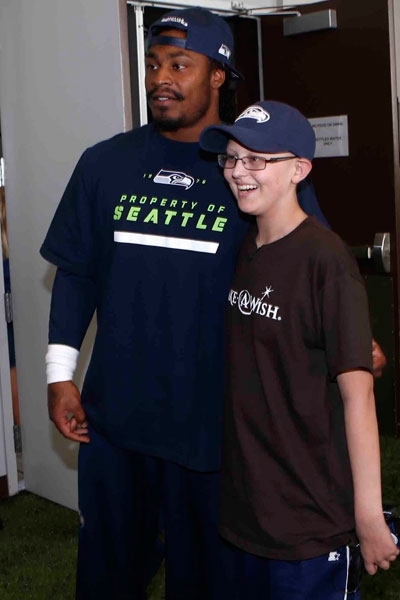 Kyle Anderson is all smiles because one of his dreams has come true.  Through the Make-A-Wish Foundation, Kyle got to meet his all time hero – Marshawn Lynch, the NFL superstar on the Seattle Seahawks!!!

Kyle has been through a lot to get to this point.  He’s been through the Chemotherapy to attempt to remove a cancerous tumor in his leg.  This lead to an operation to replace the bone with a metal prosthesis which can actually allow for his leg to grow as this 13 year old gets taller.

He didn’t just get to meet Marshawn Lynch, he got to go to their Monday Night Game against the Greenbay Packers, got an autographed footbal, met other players on the team, and received an autographed jersey among many other gifts.

“I just thanked him for all the stuff he did for me,” Kyle said. “Back in January, on my birthday, I was in the hospital and he called on the phone. I didn’t believe it was him at first, but it was. So that was nice.  It’s really special having a friend like that in the NFL.”

Marshawn Lynch responded, “It’s a good feeling, especially because I do a lot with the kids. For a kid to be sick and then the only thing that they want to do is meet me – for what strange reason, I have no idea – it made me feel good that what I’m doing somebody could take the initiative and appreciate what I actually do.

A kid’s dream has come true!!  Gotta smile about that 🙂