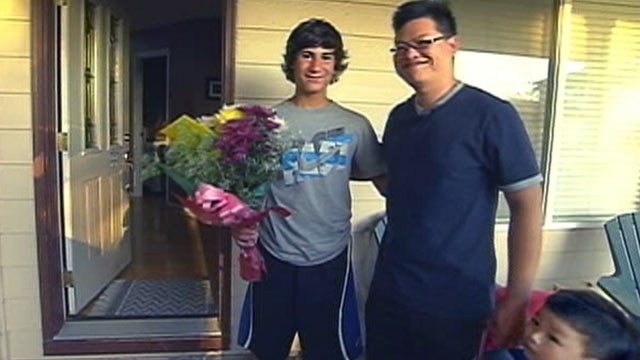 True heroes are appearing all over the world, every single day.  You don’t need superhuman magical powers to be a hero and 14 year old, Marcos Ugarte is proving it.  Note: This story is even better when you play the theme music below while reading 🙂

It all happened recently in a quiet neighborhood in Oregon.  A fire broke out at Alex Ma’s house.  Alex’s 8 year old son Cody, got scared and locked himself inside of a bedroom in the house.  All attempts to open the door proved futile as the smoke rapidly filled the house.  Alex tried several times to open the door and yell to his child, but the smoke was too think for him to stand up. Suzanne Ma, Cody’s mother, made the frantic call to 911.

This is where the hero stepped in.  Marcos Ugarte heard screaming down the road and saw the growing flame.  He immediately knew what to do.  Marcos ran down the street to help.  In Marcos’ own words:

“When I arrived at the door of our neighbor’s house, he [Alex Ma] was stumbling down the stairs because he had been completely engulfed in flames.  He had soot coming out of his nose and his mouth, he had just ingested so much of it.”

Marcos saw a nearby ladder and took action.  “I took the ladder, and I propped it up on the window, and I crawled up the window and punched the screen out and grabbed the 7-year-old boy — about 7, he looked 7 — and grabbed him and carried him down the ladder”, Marcos said.

What a rescue!!!  He is rightfully being hailed as a hero.  The local fire department is planning on honoring him later this year.  Amazing!