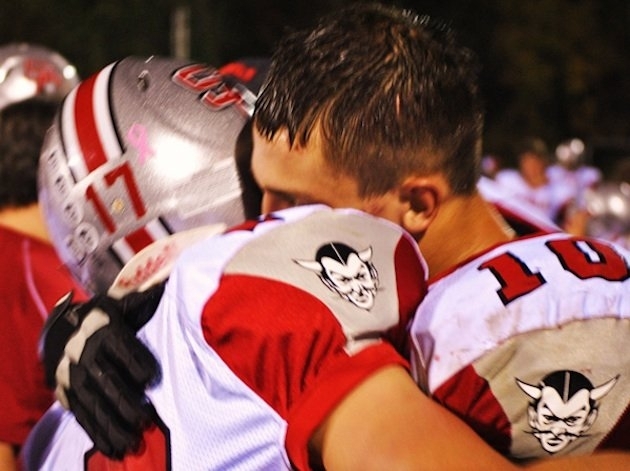 Ohio St Clairsville High School was closing a victory against their rival, Richmond Edison High. Their star running back Michael Ferns flew past his opponents and was on the way to the end zone when he stopped on the one yard line and walked out of bounds. Everyone was shocked except for the St. Clairsville High football team. Before the game the St Clairsville coach secretly told the team that if they had the chance, they should stop at the 1 yard line to allow Logan Thompson to score. Thompson had no idea of these plans.

Logan lost his father just two days earlier due to a stroke and was understandably stressed. He’s a high school freshman who never had a single carry in a regular season game. Still, Logan suited up and was ready to support his team.

The referees almost ruined their special plans because they couldn’t believe that he would stop without scoring! The refs called it a touchdown. Immediately, to the ref’s surprise, the St Clairsville players ran to the refs to tell them that they did not score! When will you ever hear of that happening? 🙂

Even though that time did not work out, Thompson had another chance on a later play. Ferns was on another breakaway and had the chance to pass it off to Thompson who scored the TD!

“Looking straight up into the sky after scoring my first varsity touchdown…i know the old man was watching! love and miss you so much daddy,” Thompson said on Twitter.

This is such an awesome story of camaraderie!