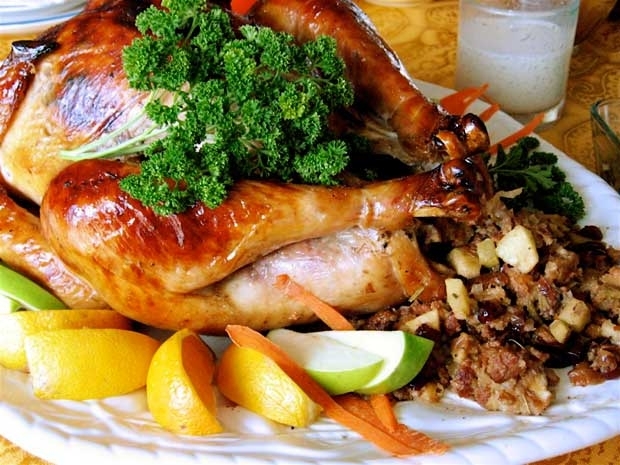 SANTA BARBARA — Every year for more than three decades, Santa Barbara City College donates a complete Thanksgiving meal for low-income, single-parent families who are enrolled in school. Throughout Wednesday morning on campus, 150 students drove up to the Thanksgiving dinner giveaway. For many, Thursday’s food festivities wouldn’t happen if it weren’t for the donation. Volunteers filled cars and trucks with turkey and all the trimmings. “Rolls, whipped cream, dressing for the turkey, potatoes, carrots, cranberry sauce, gravy and butter. So we hope that that’s everything for a student to prepare their meal for their family,” said Chelsea Lancaster, Extended Opportunities and Program Services (EOPS) adviser. The annual event through EOPS helps less fortunate students and their children. “It’s amazing, right? It’s like, really? It’s crazy. It’s really good though,” said SBCC student Nancy Damore. Each student received enough food for a family of four, allowing the single parents to share the feast with some other family members. “And it looks like we’ve been given plenty enough to do that, to share. I was going to head to the grocery store but it looks like I don’t need to do that!” said Shannon Stark with a laugh. Campus and private donors make the giveaway possible for the students working on earning their degree. “I have a 4-year-old, I do, yes. So it’s nice. He’s going to be super excited. He’s like, ‘Mommy pie, whipped cream!’ It will be a good Thanksgiving now that we got a little bit of help,” said Nicole Balacios. “If you can imagine the things that low-income families go through especially in this economic climate, they’re the ones that are really hit the hardest. They really appreciate this meal,” said Lancaster. The food for the 150 families was provided by the Foundation for Santa Barbara City College, Jordano’s, Albertson’s on the Mesa and Lazy Acres.

Spread the love
2012-11-22
Previous Post: Sailor returns home and surprises his grandmother
Next Post: Newark mayor, Cory Booker, to live on food stamps for a week to raise awareness