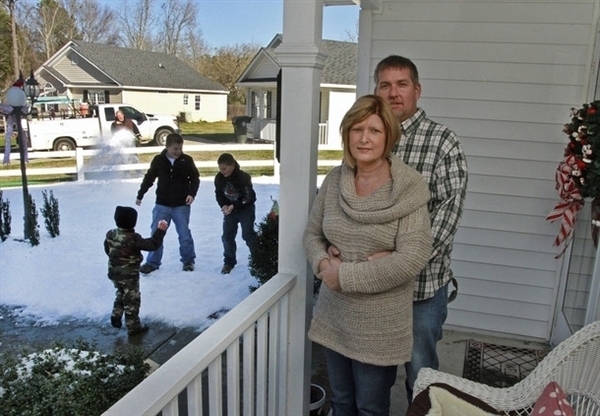 Some people will do anything they can for the one that they love.  All Laurie Pearson wanted this year was a beautiful white Christmas.  Her husband Kevin was going to make sure that happened.

“In August we found out her cancer had metastasized to her bones and brain, so I didn’t think we would have her with us this Christmas,’’ Kevin said in an interview with TODAY.com. “I started racking my brain and came up with an idea. I just wanted her to be happy because I was afraid this will be her last Christmas.”

He couldn’t make the skies turn cold and the snow to flutter down over their home in Wilson, NC, which rarely gets snow, but he had another idea.  Kevin hired a local Raleigh, NC company called Snow My Yard., a part of Greater Raleigh Refrigeration. They came out and covered the couple’s yard in snow.

“There was a glow on her face and then she smiled and said, ‘What have you done now?’ The look on her face, that was my Christmas. I just wanted to see that happiness on her face.’’ Kevin stated.

The neighborhood kids and family had a blast in the snow.

“She always says it’s the little things that make the biggest difference, and she lives each day to make a difference,’’ Laurie’s sister-in-law Janice Jones said.