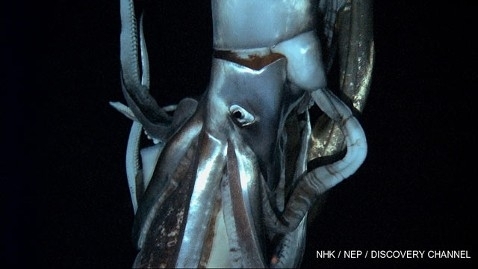 The GIANT squid is an amazing and mysterious creature.  They are the largest invertebrate that we know about.  The largest discovered was 59 feet long!  They also have the largest eyes in the animal kingdom, reaching 10 inches in diameter.  The wildest part is that they have never been observed in their natural habitat…until recently.  The only previous observations have been specimens caught in fisherman lines or washed up on shore. The ocean deep is a difficult place to explore – pitch dark, incredible pressure, and untouched.

Japanese zoologist Tsunemi Kubodera and his team were the brilliant adventurers who discovered the elusive animal.  They were largely successful because they used tactics that were never used before.

“A giant squid would never appear before a pool of light, that possibility is extremely slim”, Kubodera told NBC News in an interview. “That’s why we had to use lights that they wouldn’t be able to detect. In fact, they’re lights even humans wouldn’t be able to see either.”

“If you try to approach making a lot of noise, using bright lights, then the squid won’t come anywhere near you,” Kubodera added. “So we sat there in the pitch black, using a near-infrared light invisible even to the human eye, waiting for the giant to approach.”

Their idea worked!  They caught the large animal on film!!  This specimen was only 10 feet long which is small for a giant squid and it was missing the signature two longest tentacles, but nevertheless, it was a giant squid!

Photo of the giant squid caught on camera

“This was the first time for me to see with my own eyes a giant squid swimming,” Kubodera said. “It was stunning. I couldn’t have dreamt that it would be so beautiful. It was such a wonderful creature.”

The amazing footage will be aired January 13th on a prime-time documentary on Japanese TV station NHK with the title, “Legends of the Deep: Giant Squid”.  The special will also appear on the Discovery Channel on January 27th.

This is Good News from the ocean deep!  New discoveries are constantly being made in our beautiful planet.

Spread the love
2013-01-10
Previous Post: One good deed every day for a year
Next Post: Airport custodian returns lost iPad with $13,000 stuffed in case and donates reward