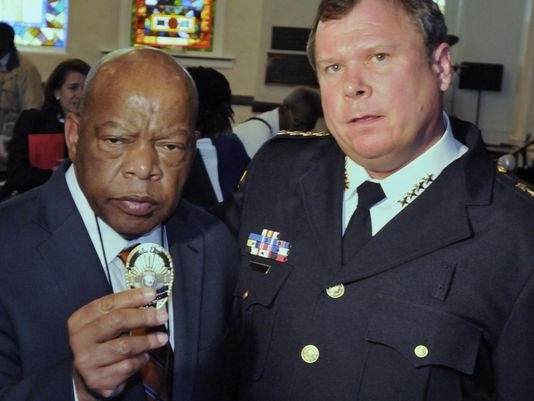 It is never too late to make things right.  Over 50 years after the ‘Freedom Riders’ were badly beaten in Montgomery, Alabama, the current police chief offered a heartfelt apology.

The ‘Freedom Riders’ were a group of black and white civil rights activists who road buses together into the Southern United States in 1961.  What was the crime?  Believe it or not, blacks and whites were not allowed to occupy the same bus in the South.  When the ‘Freedom Riders‘ arrived in Montgomery, Alabama, the police looked the other way while mobs attacked and beat the passengers.  Although incredibly dangerous, the heroic efforts of the ‘Freedom Riders‘ paved the way for the enforcement of laws to prevent segregation.

During the recent 13th Congressional Civil Rights Pilgrimage to Alabama, current police chief, Kevin Murphy, spoke at the First Baptist Church.  He apologized for the police department who “enforced unjust laws” in failing to protect the ‘Freedom Riders’ in 1961.  In a moving gesture, he offered his police badge to Georgia congressman John Lewis, who was one of the original ‘Freedom Riders’ who was assaulted decades ago.

“It means a great deal,” Lewis stated. “I teared up. I tried to keep from crying.”

“For me, freedom and the right to live in peace is a cornerstone of our society and that was something that Martin Luther King, Rosa Parks and Congressman Lewis were trying to achieve” Murphy said. “I think what I did today should have been done a longtime ago. It needed to be done. It needed to be spoken because we have to live with the truth and it is the truth.”

In closing, the police chief stated, “We’re going to move forward as one Montgomery, one MPD. And we’re going to continue to work at it. There’s still a lot of work to do, we know that. We, the police department, needs to make the first move to build that trust back in our community that was once lost because we enforced unjust laws.”

Spread the love
2013-03-18
Previous Post: After 5 years apart, man reunites with gorilla he released into wild
Next Post: Billy Joel invites fan on stage to perform with him