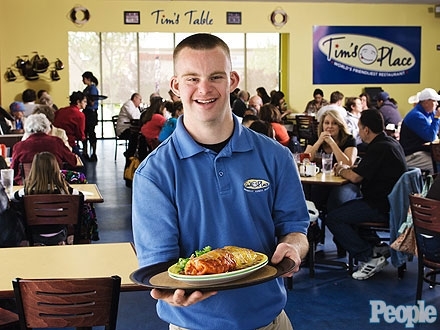 Tim Harris has an amazing story of inspiration and hope.  How many people can say they own their own restaurant, and also have WAY more gold medals than Olympian Michael Phelps?!

Just hours after Tim was born, doctors told his parents that he had Down Syndrome, and many friends of the family told them how sorry they were.  In Tim’s own words, “I guess they didn’t know then just how totally awesome I would turn out to be”.

At 13, Tim entered in the Special Olympics playing basketball, hockey, volleyball, golf and track and field.  Through the years, he has totaled dozens of gold medals, which are on display in his restaurant.

Graduating from Eastern New Mexico University with certificates in food service, office skills, and restaurant hosting, Tim now owns his own restaurant located in Albuquerque, New Mexico.  “Tim’s Place”—The Worlds friendliest Restaurant offers a very special item on his menu…. HUGS!  Tim says that most people order at least one, and says he’s given out nearly 40,000 hugs at his restaurant! “I even have a counter on the wall to keep track of the total.

“I guess you can say I’m a lean, mean, hugging machine!” said Tim.

Do yourself a favor if your ever in the Albuquerque area a get your hug from Tim’s Place!