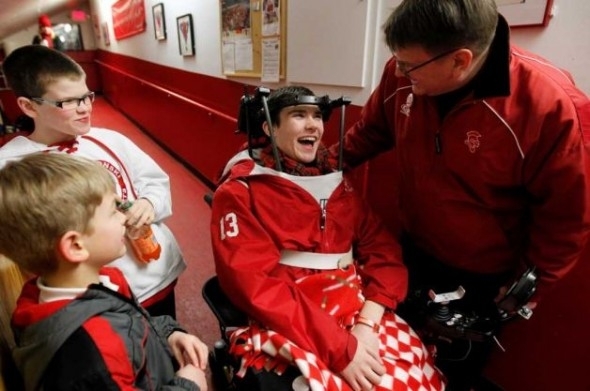 Jack Jablonski was a great high school hockey player, but when a bad hit from another player made him paralyzed, most people thought he’d never be part of hockey again.  Jack knew better though 🙂

He has had an incredible amount of support during his rehabilitation and is making some progress.  He knows he will skate again one day.

During the USHL (top junior hockey league) draft, jack tweeted “Dear USHL teams, Just thought I’d let u know I am eligible for tomorrow’s draft”.  The Chicago Steel listened and drafted him as their final pick!!!!!!

Congrats Zack!!  You are an inspiration.

Spread the love
2013-07-11
Previous Post: NBA star gives back “One corner, one block at a time”
Next Post: Man with special needs beats Michael Phelps and gives out hugs