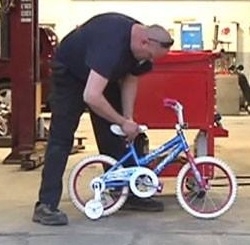 What would you do if told you only had months to live?  Bob Charland, 44, was diagnosed with a neurodegenerative brain disease earlier this year.  Hearing that he had an aggressive terminal illness rocked his and his family’s world, but he rebounded, deciding to make the time he has left really count.

Bob always felt that all children should have the opportunity to lead an active life, and he decided to do his part.  A local elementary school in his hometown of Springfield, MA, has mostly kids from low income families.  Most of these kids have never owned a set of wheels, so Bob began repairing donated broken bicycles to give to these kids.  “I get up around 4:00, 4:30 in the morning.  From then, even until 11 o’clock at night, I’m here repairing the bikes.”

Last month, he handed over 35 finished bikes to these appreciative, deserving kids.  “It’s really exciting to see all these kids so happy,” Charland says.  “I’m going to keep doing this as long as I physically can.”  Seeing these kids put down their phones, get off the couch, and spend time outdoors being active brings a smile to his face.

Diagnosis of a terminal illness can’t stop this bike man.  How about all us healthy people giving something back to our community!

Spread the love
2019-01-03
Previous Post: 2017 Janitor of the Year inspires students and faculty
Next Post: The Buddy Bench Brings Friends Together