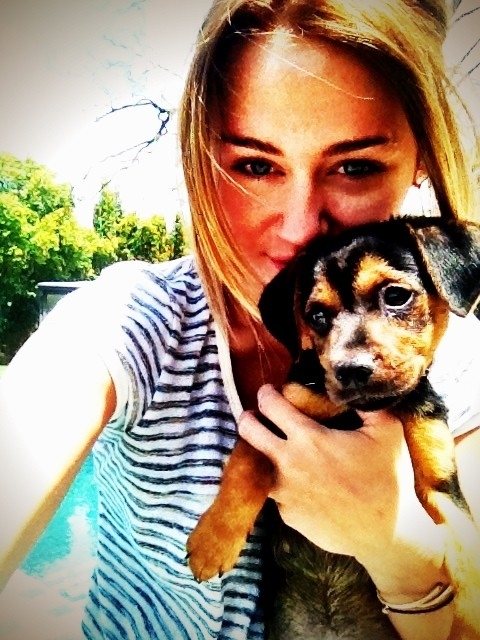 Miley Cyrus is not just an actress, pop singer and multi-millionaire, she is an animal lover, too.

Miley Cyrus founded a little puppy left abandoned in a box in front of a Walmart on May 2. The 19-year-old tweeted to her 5.6 million followers, “He was left in a box Infront of Walmart. I don’t understand how people can be so cruel. That’s why we named him Happy.” Later tweeting, “Theres times when I think we dont rescue them but they save us. He brings so much ❤ into my life.We r BOTH so grateful.”

As for the little pup’s breed, Cyrus tweeted, “We’re not 100% [sure] the breed we think Rottweiler Beagle mix :).”

The starlet tweeted numerous photos of her adorable new puppy. In one shot, he is wrapped in a piece of clothing from Maison Martin Margiela (a brand that retails at stores like Barneys and Net-a-porter). In another shot, Cyrus holds Happy in her arms while a hairdresser washes her hair.

“Happy is literally the cutest sweetest thing in the entire world! i havent put him down since we rescued him!” she later posted.

Check out more photos of Miley Cyrus and her new rescue puppy, Happy, on her official Twitter account,@mileycyrus.