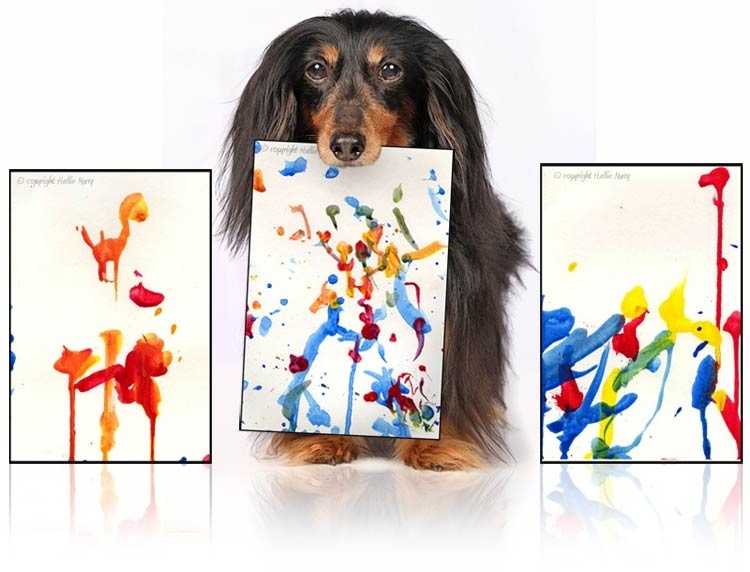 DeeDee Murry loves her longhaired dachshund, Hallie.  She found Hallie at an animal rescue in 2001.  You can say it was love at first sight.  DeeDee took her home and never looked back.

DeeDee Murry, a Seattle native, is a professional painter who creates beautiful realistic animal portraits.  Hallie always watches as DeeDee paints, often draping herself over DeeDee’s shoulder watching intently as works of art are created.  DeeDee decided one day to see if her dachshund would like to try painting and it turns out she loved it!  As DeeDee states on Hallie’s website, hallieart.com, “Within a few days she was picking the brush up out of the paint cup, going over to the paper and making strokes and dabs. She would never want to stop, if I set the brush down and told her how good she was and it was time to stop, she would quickly grab the brush back and start painting again.”

Then in 2010, Hallie went blind literally overnight from SARD (Sudden Acquired Retinal Degeneration).  DeeDee was devastated, but wouldn’t give up on her beloved dog.  She padded all of the walls to make it safer for her blind dachshund and Hallie decided that she’d get right back on her paws again!  Hallie found her way around very quickly and she even learned to paint again!  DeeDee said, “She amazed me on the first try, by reaching out and picking the brush up out of the paint cup just like she used to, as if she could see it. The only thing I had to do was tap the paper so she knew where to paint, but I’m having to do even that less and less now. She again will grab the brush when I tell her how wonderful she is but it’s time to stop, and start painting on her own, she doesn’t want to quit.”

All of Hallie’s paintings are put up for sale on her website, hallieart.com.  All paintings come with Hallie’s signature – an imprint of her nose :).  The best part is that all proceeds go to the Purple Heart Rescue, a dog charity in Washington State!

Keep up the good work Hallie!

Spread the love
2012-09-15
Previous Post: Christian Bale surprises 4 year old cancer patient with a trip to Disneyland
Next Post: Parents each donate a lung to save their son